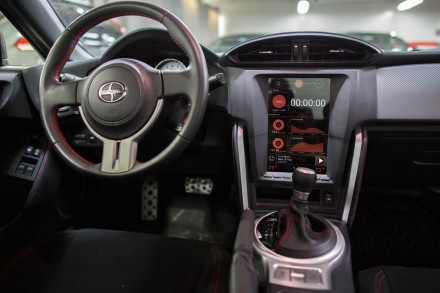 I’ve been obsessed with the Scion FR-S/Toyota 86/Subaru BRZ for years now. What interests me about it is that Toyota and Subaru committed to the purebred concept of the roadster, with front engine, rear wheel drive, and playful handling as the most important aspects of the design. This design philosophy also translated into a bare-bones, functional interior with minimal creature comforts and simple hard controls for climate and media.

Another positive for car enthusiasts is that the vehicle lends itself well to modifications- Toyota and Subaru knew their target audience would be car enthusiasts who’d love to tinker with their vehicle, and hence made it easy for them to access the mechanical and electronic parts of the vehicle. And tinker they did- a simple web search will yield hundreds of different possibilities, from headlights/tail lights to exhaust to wheels, even swapping out the engine!

Now, I spend a lot of time watching videos and browsing through forums for this vehicle- think of it as window shopping. As a result of this habit, one fine day the Youtube algorithm recommended to me a video about a new(ish) touchscreen head unit for the Subaru BRZ aptly named “Brainiac”. It is a touchscreen interface that combines the media and climate controls into one sleek-looking touchscreen interface.

The “Brainiac” piqued my interest because I do a lot of research on automotive infotainment systems at work, and in our practice meetings we tend to discuss how perceptions of a vehicle’s “coolness” or “futuristic quality” end up being translated into “less buttons and knobs”; more specifically into “like the Tesla with its big touchscreen that has everything on it”

As Human Factors Researchers we know that the trade-off of this “Tesla-ification” is that you lose the immediacy of access that buttons and knobs provide. To put it simply, hard controls like buttons and knobs may appear to be “old school” and “clunky”, but you don’t have to look at them to operate them, which lets you pay attention to the road.

Paying attention to the road is an important aspect of the design of the Toyota 86- it is a roadster purpose-built to enjoy spirited driving. Cutting through canyons and navigating hairpin turns. Knowing how much grip you have through the tires because of how low you are to the ground. Turning the steering wheel and knowing that the vehicle will go exactly where you’ve pointed it.

But that’s just my personal opinion- I wanted to know what the community felt about it. My thoughts about this are perfectly echoed by Reddit user TurbochargedSquirrel.

On the other hand, other forums seemed open to the idea of a touchscreen interface just to add a bit more flair to their vehicles.

This split is something we’ve seen in our research for a while now- people who prefer simplicity and want to focus on the driving primarily, and those who want all the bells and whistles that modern technology has to offer. My reservations with replacing traditional controls with touchscreen interfaces remain, but to the credit of the developers of Brainiac, they have added touch gestures to their interface to allow the user to perform actions without having to look. The issue I have with that, however, is that touch gestures usually have to be remembered, and do not have a visual component to them that the user can “follow along” or “trace”.

So what’s the best of both worlds? What’s a way to maintain the spirit of driving intact while also moving away from old fashioned controls? Designer Kasper Kessels’ concept might just be a bridge between those two worlds. With help from the design department at Renault, he created a concept for incorporating touch gestures into a vehicle’s infotainment that aims to solve the issue of the visual component that touch gestures tend to lack.

In the end, I’d like to pose the question to you- what do you think about the move towards “Tesla-ifying” in-vehicle infotainment systems? Are we attempting to fix something that’s not broken? Is there a way to create an interface that caters to both spirited drivers as well as technophiles? Let me know what you think!